Posted on February 3, 2011 by figliefemmine

A brief answer to the contemporary invitation for women in Italy to “speak in the public space about Berlusconi”: we are screaming since year, we have never been silent in spite of the invisibility in mass media. And our aim has always been a change in the cultural crisis, seen as a broader process of subjection of identities as mere actors in the patriarchal/racist/heteronormative/neo-liberal-capitalist comedy. So I’m glad that the “compagne” have chose to participate in the protest as a critical mass together with sex-workers. Avoiding claims about “good women” against “bad women”. Red Umbrellas Everywhere! 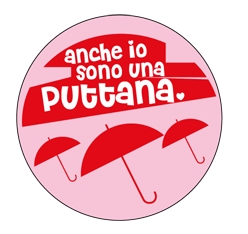